In Ayotzinapa, It Was This State Too: #FueElEstado, #YaMeCansé, and U.S. Complicity in Mexican State Violence

“Se compran colchones, tambores, refrigeradores, estufas, lavadoras, microondas, o algo de fierro viejo que vendaaaaan!” So goes the distinctive call of the trucks that circulate many neighborhoods of Mexico City, buying such items as old refrigerators, stoves, and washing machines to sell for scrap metal. Waking up to the grating voice over the megaphone is an experience ubiquitous to life in the Distrito Federal.

Over the summer of 2014, which I spent living in Mexico City, my friends liked to joke that there was no way those trucks could make enough money for the gas they waste just by buying and selling old microwaves. “It’s actually state surveillance, spying on all of us,” they would laugh. Though they insisted that they were kidding, my friends’ suggestion carries undertones that reflect the sinister reality of life in Mexico today.

The implication that state surveillance has permeated every aspect of life down to the most mundane experiences takes on new meaning in light of the events of September 26th , wherein 43 students from the Ayotzinapa teachers college in the state of Guerrero were shot at and abducted by police then passed off to the Guerreros Unidos cartel. Thousands have mobilized in response, united by the slogan: Fue el Estado. It was the State. 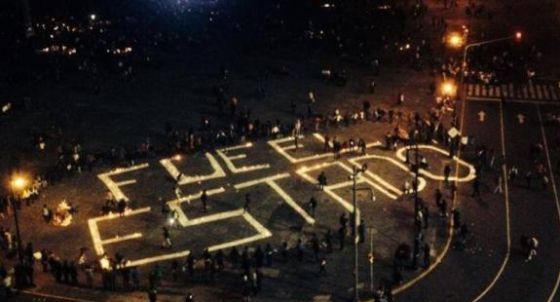 In the wake of what is now largely understood to be a massacre, it is crucial that the protestors’ response directly implicates the state. While it might be politically expedient for president Enrique Peña Nieto to blame the violence on individuals, like Jose Luis Abarca, the mayor of Iguala who originally ordered police to take action in Ayotzinapa, or the cartel members who have since confessed to murdering the students and burning their bodies the repeated assertion that “It was the State” rejects those individualizing tendencies. The slogan refuses to view Ayotzinapa as an isolated event, or as the result of a few corrupt individuals abusing their otherwise justly exercised power.

By proclaiming, “It was the State,” the protestors directly recall the relationship between the government and the violence that has racked Mexico over the past decade. The phrase “Fue el Estado” incisively levels the assertion that, in these repeated instances of repression, the state is at the root of the violence. Indeed, this proclamation points directly to the ways in which the Mexican government has been enacting low-intensity warfare (in ever more intense ways) in collusion with paramilitary forces and drug cartels against its own population over the past decade, littering its path with tens of thousands of victims of the “drug war.”

“Ya me cansé,” another phrase repeated by protestors and proliferated through social media, adds further dimension to claims about the state. By saying “I’m tired of this now,” Ayotzinapa is presented as the proverbial straw that broke the camel’s back, not an exceptional occurrence that requires more of a response than the horrific—and growing—history of state violence that precedes it. In fact, numerous mass graves found in the search for the 43 students stand as a chilling testament to the impossibility of writing Ayotzinapa off as the exception.

Importantly, the protestors make no appeal to the Mexican government to find the perpetrators of this crime or to enact justice. Indeed, they already know who the perpetrators are. Rather, protestors condemn the government for its widely acknowledged complicity in the Ayotzinapa massacre. This condemnation is one of a system (not an individual) for its ongoing violence (not an isolated incident).

As claims of “It was the State” reverberate with mighty condemnatory force, we in the U.S. must ask: which state was it?

In an excellent op-ed in the L.A.Times, Rubén Martínez states that

It has become something of a truism to point to how deeply the United States is implicated in the drug war. American demand, Mexican supply. American guns, Mexican bloodbath…What Americans can’t face is precisely that we’ve broken bad together with Mexico.

As Martínez suggests, the United States is deeply implicated in Mexico’s state violence. But it is not just through individualized modes of demand and the illegal arms trade that the U.S. is the second state with Ayotzinapa blood on its hands. Nor is it really a truism, yet, to point out that, through programs like the Mérida Initiative, Mexico has received billions of dollars from the U.S. in military and police aid. Thus, it is under the guise of combating drug violence that the U.S. has funneled capital and weapons into the hands of the Mexican state and, by association, drug cartels, in the process funding the repression of social movements and dissent.

This cannot be overstated: When Mexican protestors proclaim that “It was the State,” the U.S. is implicated, too.

It is convenient to blame what is happening in Mexico on drug violence without looking at where the capital behind that violence comes from. Yes, the disappearance of the 43 in Ayotzinapa was the state, but not the Mexican state alone. It was the capital-S State, the collaborative, neoliberal U.S.-Mexico State, the militarized and repressive State that ensures the continued flow of drugs, weapons, and money at any cost.

Peña Nieto—who, tellingly, travelled to Australia recently for the G20 summit (where protests followed him)—has said little about Ayotzinapa, though he pledges to bring to justice those who committed the crimes. The irony of this statement is not lost on those who shout “Fue el Estado”: in order to bring to justice those responsible for the disappearance of the 43, the Mexican state would have to implode. Perhaps, with mounting mobilizations against the government, it will.

But what about that other state?

Thursday November 20, 2014 is a global day of action for Ayotzinapa. Wear black in solidarity and join the protests going on around the U.S. And keep in mind that it was the state – the U.S. state, too.